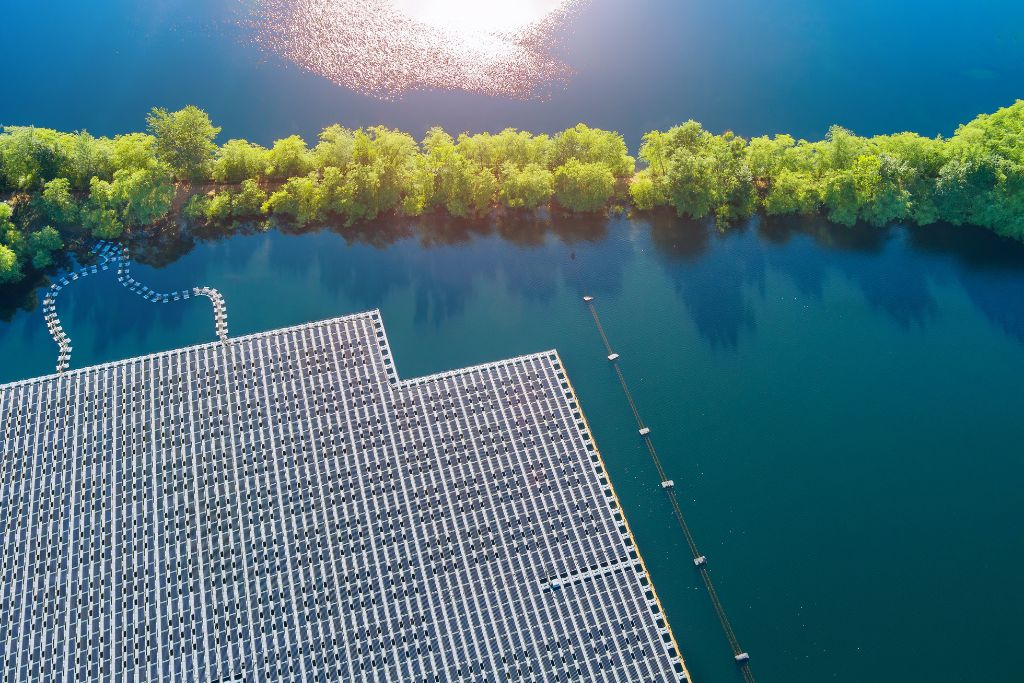 Could floating solar panels be the new normal?

Currently, the the largest floating solar farm in the world is located in Dezhou, Shandong, China, generating 320 megawatts (MW) per hour. But several other countries have begun to launch their own plans to dethrone China’s current leadership status. This includes Indiawhich is building a 600 MW floating solar farm at the Omkareshwar Dam on the Narmada River, as well as South Korea, which has built a floating solar farm with a capacity of 1,200 MW in North Jeolla province, which is equivalent to about 0.9% of the total power generation capacity of the whole country. It is expected to be in commercial operation by the end of 2022.

Compared to the long history of solar energy, the concept of floating solar only emerged in the late 2000s and is rapidly being adopted. In 2021Floating solar across the world has generated around 1,600 MW of electricity, but this number is estimated to reach 4,800 MW by 2026, with a compound annual growth rate of 33.7%.

One of the main reasons why this technology is favored by nations is its relatively high efficiency compared to ordinary photovoltaics. Floating solar can go up to 15% more efficient than terrestrial solar, according to the Environmental and Energy Study Institute, due to the cooling effect of water. Solar panels, like other electrical equipment, work most efficiently when kept cold.

The ideal temperature for a solar panel is less than or equal to 25C, and it will experience a decline in productivity when its temperature is higher 25C. Based on the model starting at 25C, a solar panel loses about 0.3% to 0.5% efficiency for every 1C increase in temperature. The percentage decrease for each degree may not seem high at first, but since most solar panels can get much hotter than 25°C, reaching up to 40°C, 50°C or even 60°C in this era of climate change, the cumulative effect becomes much larger.

Today, the efficiency, which refers to the share of energy in the form of sunlight that can be converted into electricity, of most solar panels ranges from approximately 15% to 20%. If a solar panel that can operate with 20% efficiency reaches a temperature of 45 C or 55 C, its efficiency falls in the range of 18% to 18.8% or in the range of 17% to 18.2% respectively .

This is where the concept of floating solar comes in. Seeing that terrestrial solar panels are not performing to their full potential, scientists came up with the idea of ​​using water as a coolant to keep the temperature of solar panels down. , preventing energy loss due to high temperature.

You May Also Like: 12 Facts About Solar Energy You May Not Know

One of the largest onshore solar parks in the world is the Bhadla Solar Park located in Jodhpur, Rajasthan, India. It has a production capacity of 2,245 MW per hour. Yet, in order to capture so much energy, this solar farm occupies over 14,000 acres of land to do so. Not all countries are as big as India and have so much land available to build multiple onshore solar farms. Floating solar, on the other hand, does not require rare terrestrial solar panel installations. Floating solar can be implemented in many types of water bodies, from oceans to lakes and reservoirs, where the opportunity cost of building solar panels is relatively low because they are mostly inactive and n only use fractions of space – and do not affect leisure. activities such as fishing.

Cost of floating vs land

If we compare the two, all the disadvantages of floating solar panels such as the intermittency of solar access or the pollution (and greenhouse gases) from the extraction and production of the materials used to produce them, can also be applied to their terrestrial counterparts while the advantages of floating solar panels are not inversely replaceable; the former is essentially the most evolved version of the latter. However, if we really want to nitpick, the cost of floating solar is more expensive than that of terrestrial solar. Estimates suggest that the installation cost of floating solar panels is about 10-15% higher than terrestrial panels, considering the additional cost required to manufacture the floats. But in terms of the cost of operation and maintenance, it is surprisingly close between the two. Although activities such as accessing floating panels away from shore or preventative maintenance of anchors and mooring lines require additional costs, these additional costs are offset by the elimination of fence maintenance costs. as well as the lack of vegetation, which is often applied in terrestrial solar to keep the panels cold.

The future of floating solar

Due to its relative infancy, current floating solar technology requires a one-time installation cost that is more expensive. Nevertheless, compared to its long-term effects on preventing energy leakage up to 15%, at least during the life of solar panels of 25 years, floating solar is actually more cost effective and one can make argue that its benefits outweigh terrestrial solar. Governments should consider adding floating solar technology to the energy portfolio and part of renewable energy transition strategies.