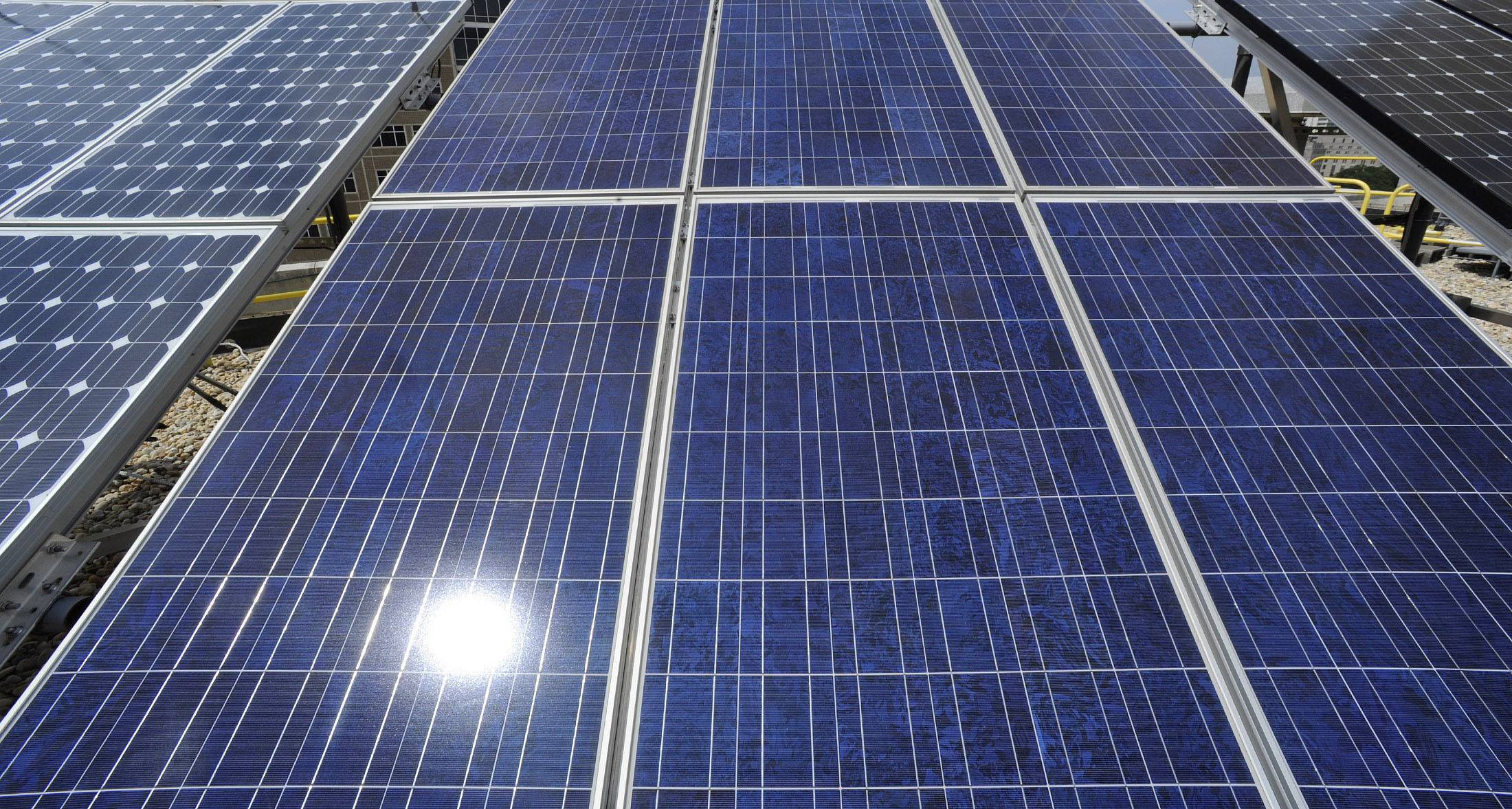 The best listening experience is on Chrome, Firefox or Safari. Subscribe to Federal Drive’s daily audio interviews at Apple podcasts or Podcast One.

Solar panels have a life cycle. The billions of panels covering the once pristine rooftops and landscapes and perhaps even your office building will all need to be stripped and replaced at some point. Today, the Department of Energy released an action plan on how to safely and economically manage used photovoltaic materials. For more details, the manager of the photovoltaic program of the Department of Energy, Lenny Tinker has joined the Federal Drive with Tom Temin.

Tom Temin: Mr. Tinker, good to have you.

Lenny Tinker: Thank you very much, nice to be here.

Tom Temin: So, I didn’t realize these things don’t last forever, but they don’t, what’s going on? How do they wear?

Lenny Tinker: Well, there are lots of different ways they can actually wear out. Typically what happens is, you know, they’re kind of outdoors, they’re exposed to love the elements. So different things can happen through the thermal cycle, cracks can grow, contacts can oxidize. But actually, the power output of the system starts to decrease over about 20 to 30 years, that’s the expected lifetime.

Tom Temin: Okay, and within those materials that actually produce the current, are there any dangerous materials? Are they safe to handle? What are the problems ?

Lenny Tinker: Well, there are a variety of different materials inside the modules themselves. Most of the time, the modules are completely safe. But some materials used can be really dangerous. For example, lead can be used in soldering, like many electronic devices that we all use. And therefore, it is important for people to follow EPA regulations and testing for how to handle the materials.

Tom Temin: I get it. And is disposal usually done locally by commercial companies? Suppose I have a building and there are a lot of photovoltaic cells, they have to be removed, who does this kind of work in general?

Lenny Tinker: Thus, this work is usually outsourced and the disposal itself based on the modules actually used. It is therefore these tests that are regulated by the EPA, known as Toxicity Characteristic Leaching Protocols, or TCLPs. These modules would therefore be tested, which would then determine how they should be disposed of, whether or not they would be considered hazardous waste, or they could be disposed of as general landfill waste. And then usually someone would hire someone to take the system apart and then dispose of it appropriately.

Tom Temin: All right, so what are the dangers here and tell us about the action plan, what is the Department of Energy trying to do here with the action plan?

Lenny Tinker: So our goal with the action plan is to indicate to the community and set a direction on how we could be even better than the regulations that I mentioned that are stipulated by the EPA. So we see there is potential to improve the way materials are disposed of and actually increase the recycling potential of the whole system. Now most of a PV system is made of steel, aluminum and copper. And the recycling procedures for that are pretty well worked out in today’s industry, but the modules themselves because they’re composites and composite materials are a bit more complicated, there’s a possibility to figure out how to recycle better and retrieve the value of these modules. And so, in our action plan, we set out a direction for research that can be done as well as stakeholder engagement and data aggregation. So everyone is aware of what’s really going on with the modules, so we can, you know, make the PDS as good for the environment as possible.

Tom Temin: And of course, when you recycle carefully, remove and recycle, it can get expensive. And the same goes for the economy of this part of the calculation?

Lenny Tinker: Absolutely. Economics drives a lot of the decisions people make in terms of energy and, indeed, disposal of systems. So right now, recycling can cost about 10 times more than general disposal. And so we’re trying to do, you know, like I said, how can you best recover the value of the modules when you recycle them? Because that, of course, helps pay for the recycling itself? And also, how can you develop modules and produce them in such a way that they are even easier to separate?

Tom Temin: We speak with Lenny Tinker. He is director of the Department of Energy’s photovoltaic program, which is part of the DoD’s Office of Solar Energy Technologies. And the rare materials there could be outsourced, originated in the United States, is there the possibility that by recycling properly, we can almost develop a source of rare materials from an effect extraction of old solar panels right here in the United States?

Lenny Tinker: Absolutely, it is possible to recover rare and valuable materials from photovoltaic systems. The bulk of the whole system is, as I said, made up of steel, aluminum and copper. Now that’s the system. In the modules there are more precious materials such as silver, which is used on the front to capture electricity. There are also small amounts of other materials depending on the module, such as tellurium, that could be salvaged. The absolute magnitude of what could be recovered from PV systems for some time may be quite small, as the majority of systems deployed today, more than 75% of them have been within the last five years. And with an expected lifespan of 25-30 years or maybe even more, there’s not much to quote for mine now. But that being said, it is possible to recover these materials when the time comes for dismantling.

Tom Temin: Sure, mining was my word, but the idea that they might at some point in the future be salvaged and reused to make new panels?

Lenny Tinker: Absolutely. One of the main objectives of the Department of Energy’s SET office is to ensure that we recover as much value from the system, which helps the economy on the updated basis of electricity. So it can be even cheaper than it is today.

Tom Temin: Okay, so who is this action plan aimed at specifically?

Lenny Tinker: The action plan is addressed to all our stakeholders, it is a way for us to signal to people who would apply to our office, as well as people involved in the solar industry and policy makers what we consider as an opportunity and a future direction for sorting waste.

Tom Temin: Yeah, so it could be kind of a new niche industry in waste management, if done right. Just to say?

Lenny Tinker: Yeah, absolutely. Absolutely. And there are already companies looking today at how they could enter this industry.

Tom Temin: And does the DOE have any idea of ​​tonnage or square footage or ounces, I don’t know what the right measurements are, for these materials that may need to be recycled in the future?

Lenny Tinker: Yes, so we can make predictions on the actual amount that might be released. The current administration has an ambitious goal of having 100% carbon-free electricity by 2035. And in that scenario, we end up increasing quite a bit, we still think the amount of waste we generate from photovoltaic systems is actually relatively small, less than about a tenth of a percent of total waste. So we can enter the actual tons here and there and how that splits up, but the point is that it’s a significant but not extraordinarily large amount of trash.

Tom Temin: OK, and are you one of those types of rooftop solar panels yourself?

Lenny Tinker: Unfortunately, with my current house, it didn’t work. But I am a member of a community solar program where I can pay into the system and then have electricity generated from my bill

Tom Temin: Or you could build a steeple with a windmill on top.

Lenny Tinker: It would be much more difficult and certainly not as scalable as a PV system, which can be made to almost any arbitrary size.

Tom Temin: Okay, Lenny Tinker is the photovoltaic program manager at the Department of Energy. Thank you very much for joining me.

Lenny Tinker: Yeah. Thank you very much for inviting me. I appreciate it.