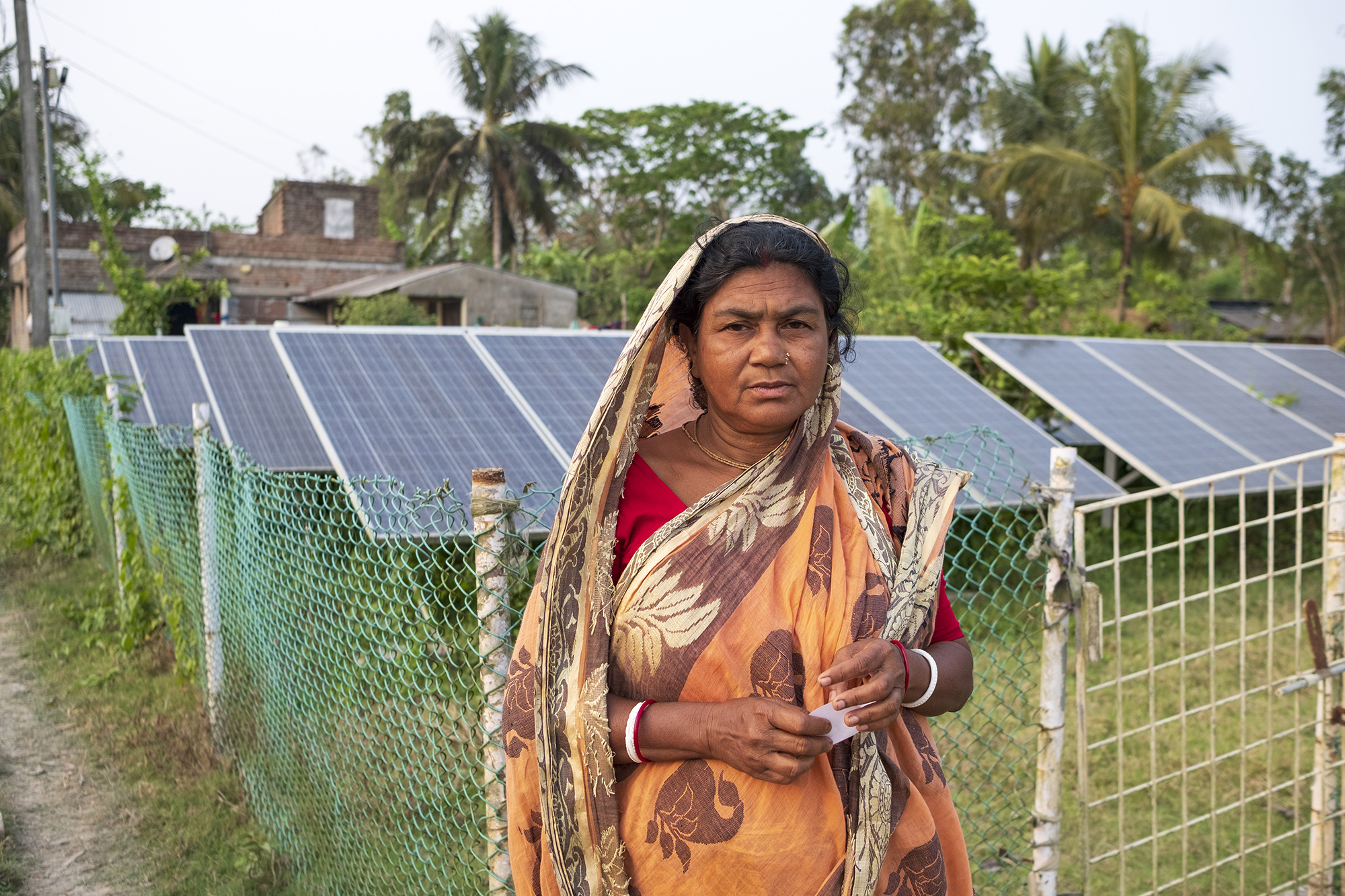 How the Sundarbans missed an opportunity to harness solar energy

Hello reader, a small request before continuing: stories about the local environment are important nationally and globally. We connect the dots for you. Sign up for our free weekly newsletter and get our stories straight to your inbox, every Saturday.

Rows of gray cement blocks look like tombstones in an abandoned cemetery. The dilapidated one-story house, adjacent to a field, looks like a horror movie set. Less than a decade ago, the cement blocks served as the base for solar panels, part of a 110 kilowatt (kW) solar power plant, which was installed in the building. When commissioned in 2003, it was one of the largest off-grid power plants in the country.

The place is Indrapur, a remote village on G-Plot, one of the last islands of the Indian Sundarbans before the Bay of Bengal begins. Here, grid-connected electricity came till 2018. Before that came the solar micro-grid, funded by the West Bengal Renewable Energy Development Authority (WBREDA) and implemented by Tata Power, the latter celebrating success even a decade after its inception. implement. Between 1996 and 2006, WBREDA had installed 17 such solar micro-grids in the Sundarbans.

Initially, the Indrapur micro-grid would provide electricity for five hours a day, with three to five points in each household, for a monthly subscription of Rs. 80 and Rs. 120, respectively. After the damage caused by Cyclone Aila in 2009, capacity fell to three hours a day. In 2013-2014, according to local residents, the power plant was disused.

The cause of the shutdown of the plant remains uncertain.

According to a retired WBREDA officer, who did not want to be named, the problem started when some beneficiaries stopped paying monthly bills. Meanwhile, local residents say that due to reduced plant capacity, some traders have switched to diesel generators.

“The project was initially managed by a private agency, but later the management and maintenance were handed over to the local community. Since then there were many problems and finally the factory stopped working in 2013-2014,” local resident and fisherman Manibhushan Bera said in Mongabay-India as he waited his turn in a local grocery store. Emails from Mongabay-India to Tata Power, requesting information on the management arrangement and the current status of the solar micro-grid at Indrapur, went unanswered.

Although the precise reason for the closure is unclear, in 2014 the beneficiaries – 120 households and 180 shops – reverted to diesel, kerosene as well as existing rooftop solar panels. Rooftop solar power was already common in Indrapur before the solar micro-grid project – and long before the arrival of grid-connected electricity. The panels had been distributed either by WBREDA or the gram panchayats at a subsidized rate, while some had been purchased personally by residents.

In India’s Sundarbans, a landscape characterized by small to large islands amid wide, wild criss-crossing rivers flowing to the sea, the arrival of grid-connected electricity in 2018 has reduced reliance on solar power in most regions. But that didn’t make solar power redundant. Local residents knew of its importance through their experiences.

Whenever there is a cyclone, the power supply is interrupted for days or even weeks – cyclone Bulbul in 2019, Amphan in 2020 and Yash in 2021. This is why more than half of the houses maintain their own solar panels on the roof.

“The individual solar panels were a big help after the cyclones. No house that has a solar power installation would want to get rid of it,” said Basanta Naskar, a resident of Bagdanga in Mousuni, another isolated island at the mouth of the Bay of Bengal. A 55 kW solar micro-grid was set up in Bagdanga in 2001 and a 110 kW plant in Baliara a few kilometers away in 2003, as part of WBREDA’s decade-long effort to set up solar micro-grids in the Sundarbans.

However, these two micro-grids disappeared in 2012-2013. As in Indrapur, beneficiaries in the villages of Bagdanga and Baliara have also reverted to kerosene and diesel generators, in addition to their rooftop solar installations. Then in 2018, grid-connected electricity reached the island.

In 2022, rows of solar panels – some broken, some intact – occupy land adjacent to dilapidated buildings that once housed the two villages’ power stations. The buildings are now occupied by the family of the man who worked as an operator when it was operational – the family of Chandan Ruidas in Bagdanga and that of Tapan Das in Baliara. The families refused to leave despite the poor condition of the building, arguing that they suddenly stopped receiving their payments in 2012.

There is no doubt that the introduction of grid-connected electricity less than five years ago has already been of great help to local people in improving their quality of life. But did this have to come at the cost of abandoning existing off-grid renewable energy generation facilities?

“No,” SP Gon Chaudhuri, one of India’s renowned solar power experts, told Mongabay-India, “But that’s exactly what happened, which made the Sundarbans have missed an opportunity to reduce their carbon footprint.”

Chaudhuri, winner of the Ashden Award (UK) and Eurosolar Award (Germany) among many honours, was with WBREDA until his retirement in 2009 and was instrumental in microgrid installations in Sundarbans. He then served WBREDA in an advisory capacity.

WBREDA had, over a ten-year period from 1996 to 2006, installed 17 solar power plants in the Sundarbans, with a cumulative installed capacity of 872.5 kW. Others were added to the list later. Sagar Island alone had 11 micro-grids but none of them are functioning today, Sagar Island legislator Bankim Hazra, who is also Minister of Development, confirmed to Mongabay-India. Sundarbans. Most of these facilities built by non-governmental organizations also suffered the same fate.

All in all, considering all the microgrids launched together, the Sundarbans could have generated more than one megawatt (MW) of solar power – an opportunity begging.

While microgrids failed, privately owned rooftop solar systems have always been and have continued to be popular among residents. WBREDA had itself installed more than 200,000 solar photovoltaic (PV) home lighting systems – or rooftop solar panels – in the Sundarbans region. The beneficiaries had to bear 15 to 18 % of the unit costs. The inhabitants of most villages on the various islands still maintain these units. They require the battery to be changed every five to six years and families are generally happy to bear this cost. This cost is one of the main reasons why people express more desire for rooftop solar than for microgrid – in rooftop solar installations, the user’s share (usually less ‘a quarter) at the time of purchase and battery change after four to five years are the only costs.

WBREDA Director Gautam Majumdar did not respond to Mongabay-India’s text and email queries.