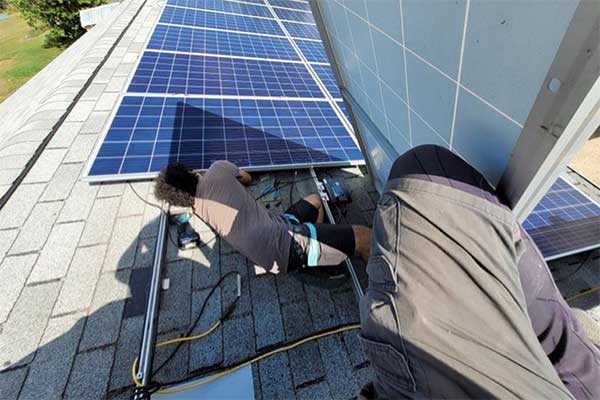 Our correspondent spoke to a Winnipeg-based solar company to learn more about recent solar policy changes in the city and the potential or possibility of a solar community in Manitoba.

Homeowners who have wanted or succeeded in going solar in Winnipeg are used to the long lead times and extra paperwork to overcome. Lorena Mitchell, President of Evolve Green and President of Manitoba Sustainable Energy, brought this matter to the attention of City Councilor Matt Allard. This led to the adoption of some policy changes just over a year later. Now, solar projects under 10 kW in Winnipeg no longer require an electrical engineering stamp.

“It was very unusual to need a buffer for small-scale residential systems. You don’t see that anywhere else,” said Mitchell, whose company designs and installs solar systems. She said the stamp costs about $1,200 and the process of obtaining it was long, up to 6 months.

There is also now a fast-track process for solar projects in the city, which will help streamline the process a bit more. Large residential projects will also be able to benefit from the accelerated process, the objective being to have complete documents in 10 days.

For some of Mitchell’s clients, it was hard to see the potential in residential solar investing. They were put off by the fact that it could take 10 to 12 years for the solar installation to pay for itself, “they look at that total, so it says it takes eleven years, they say ‘wow, it’s going to take eleven years to be self-financing? well, your car will never be amortized”, for example.

A successful solar project in Manitoba is able to generate power at half the cost of buying from the grid.

Mitchell hopes that Greener Home Program will help encourage more homeowners to invest in solar power since they could be eligible for up to $5,000 in return. She believes additional education could also help, in addition to more tax benefits.

Efficiency Manitoba has a variety of programs residents can apply for; that can help them make the transition to a more energy-efficient home. Mitchell said there will soon be a rebate for residential solar projects through Efficiency Manitoba, but since it’s not currently available, residents likely won’t be able to take advantage of it for the 2022 season.

Currently, renewable energy appliances are taxed at 12% GST. Mitchell points out that some of the legislation surrounding eligibility for reduced taxes on the electricity each solar system generates is gray: “It’s 1.4% PST if you use the electricity to heat a house. It’s interesting because our solar systems provide energy, which provides heat. According to the Electricity and Piped Gas Taxation Division, electricity purchased primarily for heating a home where the purchaser resides may be taxed at a reduced rate of 1.4% PST in Manitoba.

However, Mitchells explains, it is for Manitoba Hydro. Unfortunately, residential solar projects are not eligible; even though many solar systems help heat the home, residential customers still have to pay 7% PST. If solar projects could be considered as systems providing heat, it would be a major help for people considering going green. Manitoba farmers don’t pay the full tax on a solar system used to heat their farm. If this tax relief were to be extended to homeowners as well, it could encourage more residents to go solar.

According to Mitchell, other provinces have a more streamlined system for solar projects.

For example, in Ontario and Saskatchewan, the process is done online and is well followed. There is a disconnect in Manitoba, with multiple departments managing elements of the paperwork process. Even though Mitchell’s business is located an hour from Winnipeg, it had previously been turned away from doing local projects due to the significant amount of paperwork and administrative delays.

Recent policy changes have been a good start to help reduce the challenges that solar projects have been facing. It should be noted that the new accelerated process will help make Manitoba a more attractive location for large-scale solar developments. It was a step towards a greener Manitoba, but more needs to be done before community solar projects become a reality in the province.

As we reflect on the future of solar energy in Manitoba, we discussed what would need to change for community solar projects to take off in the province.

Mitchell said, “In our province we can’t have community solar projects because the electricity has to go up to a meter and they don’t split it after that, they don’t allow it. Our legislation is one power company, basically, it’s Manitoba Hydro… They have to change that. And it’s been in the work to try to change that because technically car chargers sell power. They need to change the language but haven’t done so yet. It’s in progress. »

Manitoba Hydro has a monopoly on electricity, so the change should start there. Mitchell adds, “Right now with community programs, that’s the sticking point. Manitoba Hydro does not allow community projects… So, for example, we would like to have solar farms that people could buy locally to offset their own footprint. The current system would resell the electricity at half price to Manitoba Hydro.

Community Solar could be something the province would benefit from in the future, but the legislature would have to change to support such initiatives.