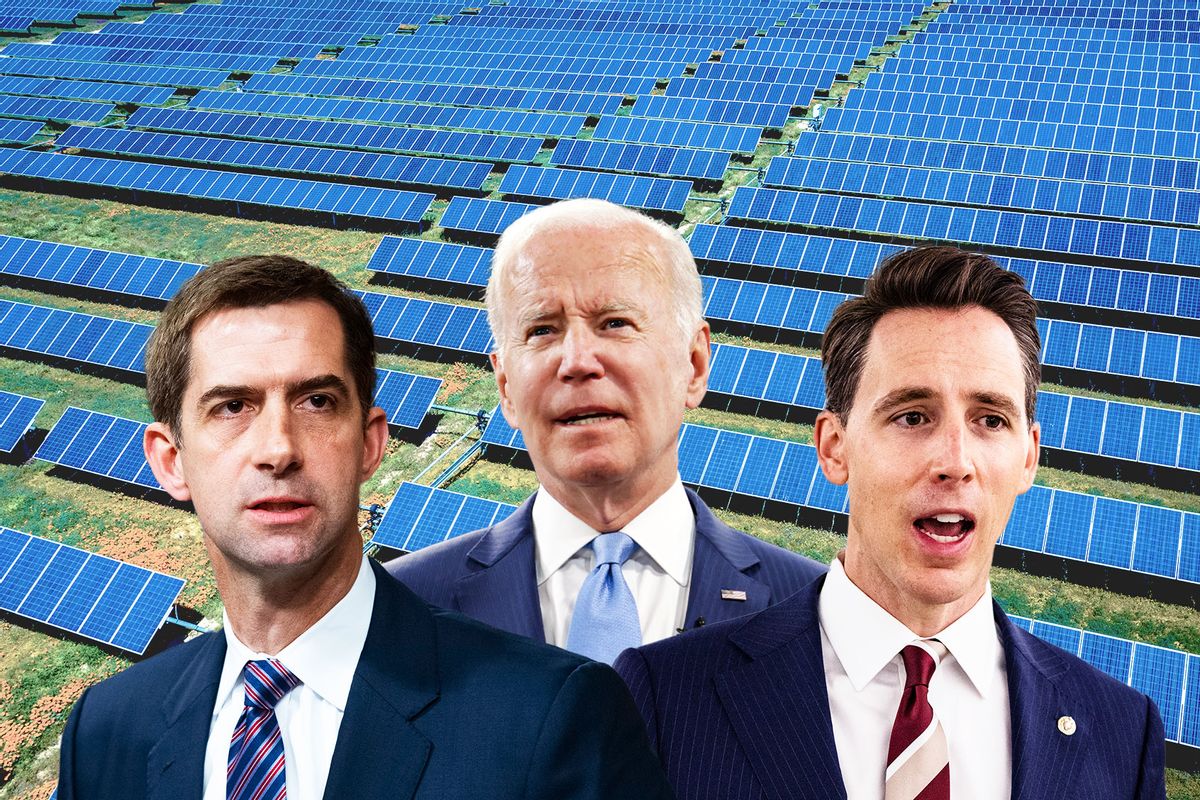 Joe Biden wants to revive solar power – a great idea, in theory. But will it work?

Whatever you think of Joe Biden as a man, public figure or CEO, his presidency is unlike any other in modern American history. He has most likely faced more simultaneous crises than any president since Franklin D. Roosevelt, and an illustration of this fact is that Biden has already invoked the Defense Production Act (DPA) – a law of the Cold War that grants the executive branch broad authority to mass-produce the resources needed to mitigate national emergencies—at least six times.

Last year, the Biden administration called on the DPA twice to boost production of COVID vaccines and supplies, and then did the same to prepare for wildfire season in the West l last fall. Between March and May this year, the president again invoked the law to expand production of infant formula as well as minerals essential for the production of electric vehicles.

Regardless of their individual merits, these executive actions have flown through the news cycle with little to no reaction from conservative pundits and Republican politicians, who are typically eager to criticize Biden’s every move. That changed categorically this week after the President’s sixth DPA authorization, which left Democrats and Republicans bickering over whether Biden was extending his presidential powers outside of their acceptable range.

READ: A major solar player leaves some customers in turmoil

On Monday, the administration authorized the use of the DPA to bolster domestic production of solar power and other green energy sources with loans and grants, according to Reuters. At the same time, the president also invoked an obscure section of the Smoot-Hawley Tariff Act, a once-controversial protectionist trade policy enacted in 1930, to exempt tariffs on solar panels imported from Cambodia, Malaysia, Thailand. and Vietnam for the next 24 years. month.

This was all part of necessary “advance planning” intended to “ensure the adequacy of electrical resources,” the White House said in a press release. “Electricity generated by solar energy is also essential to reduce our dependence on electricity generated by burning fossil fuels, which drives climate change.”

Sounds like a relatively uncontroversial statement, right? Not these days. Biden’s waiver has angered many Republicans (and even some liberals) by effectively freezing a federal investigation into whether China’s solar industry diverted production to Southeast Asia to circumvent tariffs. increased.

Want a daily recap of all the news and commentary Salon has to offer? Subscribe to our morning newsletter, Crash Course.

Sen. Rob Portman, R-Ohio, a longtime beneficiary of the fossil fuel industry, argued this week that Biden’s decision to relax rules on solar imports was “the wrong policy at the wrong time.” . Using an abbreviation for the Chinese Communist Party, a trigger phrase noted on the right, Portman wrote on Twitter: “This rewards the CCP for its unfair business practices, does not hold it accountable for its human rights abuses, and will not stimulate not economic growth.

Sen. Josh Hawley, R-Mo., Likewise accused Biden of being in China’s pocket, saying the president ‘wants Americans to pay $6 a gallon for gas and American energy workers out of work – but he will break the law to allow imports Chinese solar panels”.

“Joe Biden has sold American solar panel makers to China”, echoes Senator Tom Cotton, R-Ark, a known enemy of renewable energy. “This weakness is dangerous.” (It should be noted that Cotton and Hawley are clearly eyeing presidential campaigns in 2024, especially if Donald Trump decides not to run.)

Biden’s invocation of the DPA and the Smoot-Hawley Tariff Act are two separate parts of a larger effort to bolster green power. More liberals and progressive have rented this effort as a necessary step in America’s urgent transition to renewable energy. But that sentiment is not universal, with some voices on the left saying Biden’s tariff suspension flouts written law and could lead to a mix of unintended consequences.

“Let’s be clear what’s going on,” Stoller tweeted. “The White House is administratively removing key pieces of trade law to allow Chinese solar producers to eventually use slave labor and coal-fired power to transport their products duty-free through Malaysia, Cambodia, Vietnam and Thailand.”

RELATED: Cleaner air and a climate solution are now within reach – if we have the political will

David Dayen, editor of American Prospect, broadly echoed Stoller’s concerns, saying that Biden’s pricing policy “will likely allow China to sell cheap solar products in the United States by disguising them as coming from of [Southeast Asia]and delays the building of a US-based solar industry.”

“More broadly,” he added, “any small business wishing to challenge business practices that harm its business can now be blocked by a government that disagrees, or a massive lobbying campaign that compels government to do so. The precedent set by this action goes beyond solar panels and could impinge on the government’s ability to conduct trade and industrial policy.”

Both Stoler and Dayen’s the arguments are to some extent based on a careful reading of a provision in the Smoot-Hawley Tariff Act which allows the President, after declaring an emergency, to “allow…the duty-free importation of food, clothing and medical, surgical and other supplies for use in emergency relief operations. It’s a stretch, they point out, to claim that solar panel production is considered “emergency relief work” and that part of the law was clearly intended to deal with natural disasters or invasions. foreign.

One could certainly argue that America’s inability to wean its economy off fossil fuels has created an emergency, but Biden critics would say twisting the language of a 90-year-old tariff law isn’t much of a solution. .

“If you look at things [Biden] could do, but doesn’t, that’s squarely within the powers of a president, one wonders why he chose solar panels and the DPA,” Erik Gordon, a business professor at the University of Michigan, told Salon via email. “It wasn’t a national emergency last month or the month before. Rising gas prices don’t make it a national emergency.”

It is true that there are various policies that Biden could pursue at the executive level that would at least begin to address the long-term impact of climate change. He could ban oil drilling on federal lands and invoke the National Environmental Policy Act and the Clean Water Act to stop carbon-intensive infrastructure projects that are currently in development.

RELATED: The Battle for Cheap Solar Power Heads to the Sunny South — But Utilities Fight Back

But those kinds of sweeping policy changes are politically risky for a president with a narrow majority facing a midterm election. More importantly, they do not determine global warming at its root (ie the continuation or acceleration of carbon emissions). Arguably, there is something of a vicious circle at work: climate-induced weather increases the risk of power outages, and a ban on drilling on federal lands, while desirable in itself, could make the impending “reliability crisis” predicted by the Federal Energy Regulatory Commission even worse.

It’s unclear whether Biden’s imaginative tariff suspension will pass legal scrutiny. But even if it does, critics say, it may not do much to meet the country’s solar needs, especially when domestic solar generation is constrained by the current DPA bank balance.

“There is not enough money authorized for this fiscal year, and probably the next, to really spur the creation of a domestic solar manufacturing industry,” said Tyler Priest, associate professor of energy policy at the University. of Iowa, in Salon in an interview. “It’s just a nudge, or a signal that the Biden administration supports the growth of this industry.”

According to Bloomberg, the federal allocation for the DPA has fallen to less than $500 million, much of which has already been allocated to fund the production of drones and baby food. Solar power makers told the outlet that what was left over would only fund the construction of a few solar power manufacturing plants.

“Even if they spent all of that on solar panels, it’s a pittance,” Nick Iacovella, spokesman for the pro-industry Coalition for a Prosperous America, told Bloomberg.

RELATED: Why Biden’s Climate Agenda Might Be Very, Very ‘Silent’

Leah Stokes, associate professor of environmental science and management at the University of California, Santa Barbara, painted a more positive picture, saying the benefits of DPA could be felt in a variety of green technologies.

“Beyond solar, the funds will go towards heat pump technology, building insulation, clean hydrogen and critical grid components,” she told Salon via email. . “In particular, the expansion of onshore heat pump manufacturing is an exciting opportunity to meet growing US demand.”

Stokes pointed to statistics released by Rewiring America, a pro-electrification nonprofit, which found that actions like Biden’s could lead to the creation of up to 462,000 jobs in the clean heating sector and utilities. solar sectors – jobs that cannot be automated or offshored, an important one as the coal, oil and gas industries continue to contract year on year.

But Biden’s invocation of the DPA “is just a first step,” Stokes noted. “The DPA alone cannot deliver the transition to clean energy – it is unfortunately a small amount of money compared to the investments we need,” she explained. The potential solution lies, Stokes said, in Biden’s stalled legislative agenda, specifically “the $555 billion in climate and clean energy investments” that the Democratic-led House passed last year in part of the president’s Build Back Better package, but lay dormant in the Senate. “We need Congress to act,” she said. With less than five months to go until the midterm elections, that seems like wishful thinking.

RELATED: Solar panels are starting to die. What will we do with the megatons of toxic waste?