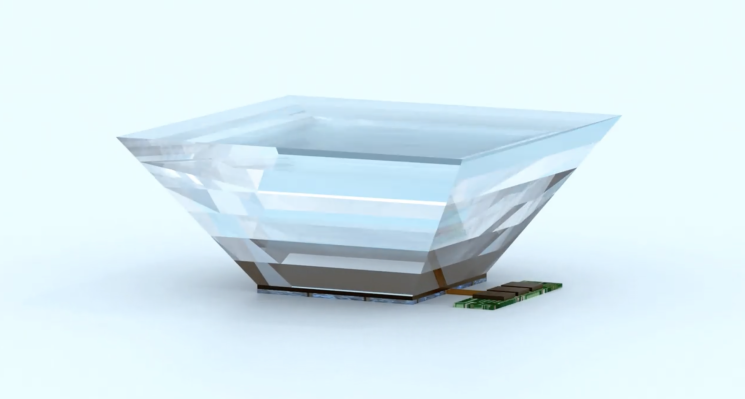 Stacks of tiny lenses that look like inverted pyramids could power solar panels, helping them capture more light from any angle on sunny, overcast days.

Solar panels work best in direct sunlight, which is why some solar systems follow the big ball of fire across the sky, turning to face it for maximum light. Unfortunately, such tracking technology is expensive and moving parts can break.

Shortcomings like these motivated Stanford researchers to develop an alternative. The resulting technology – named Axially Graded Index Lens, or AGILE for short – offers a way to increase the efficiency of static solar panels, even in diffused light, authors Nina Vaidya and Olav Solgaard said in a peer-reviewed article. PAGILE lens rototype arrays managed to focus light into a 3x smaller area, while retaining 90% of its power at best, and well ahead of more basic concentrators when the light was more tilted (sometimes the concentrators can sacrifice light intensity but come forward from the gathering angle).

Focusing light to extract more energy from solar panels is nothing new, but the authors point out that concentrators such as Fresnel lenses and mirrors only provide “modest acceptance angles. Incidentally, the pyramid design also manages to look glamorous in a render video posted alongside the paper.

The AGILE goal prototype presented in three stages of development. A: Bonded glass. B: With aluminum side walls. C: With a light-absorbing solar cell. Picture credits: Nina Vaidya

The internet is full of interesting ideas that could help us capture more energy from the sun. Many are inspired by elements from nature, such as butterfly wings, fly eyes, flower petals, and even puffer fish. The design of AGILE “does not come from nature”, says Vaidya, but the paper acknowledges that “there are features of AGILE that can be found in the retina of fish (e.g. Gnathonemus) and eyes compounds in insects (e.g., Lepidoptera), where a gradient index is present as anti-reflection to maximize transmission as well as to allow camouflage.

Although the researchers have not announced any plans to commercialize AGILE, the prototypes were designed with the solar industry in mind using readily available materials, according to a Stanford press release.

“Abundant and affordable clean energy is a critical component to addressing pressing climate and sustainability challenges,” Vaidya said. “We need to catalyze engineering solutions to make this a reality.”