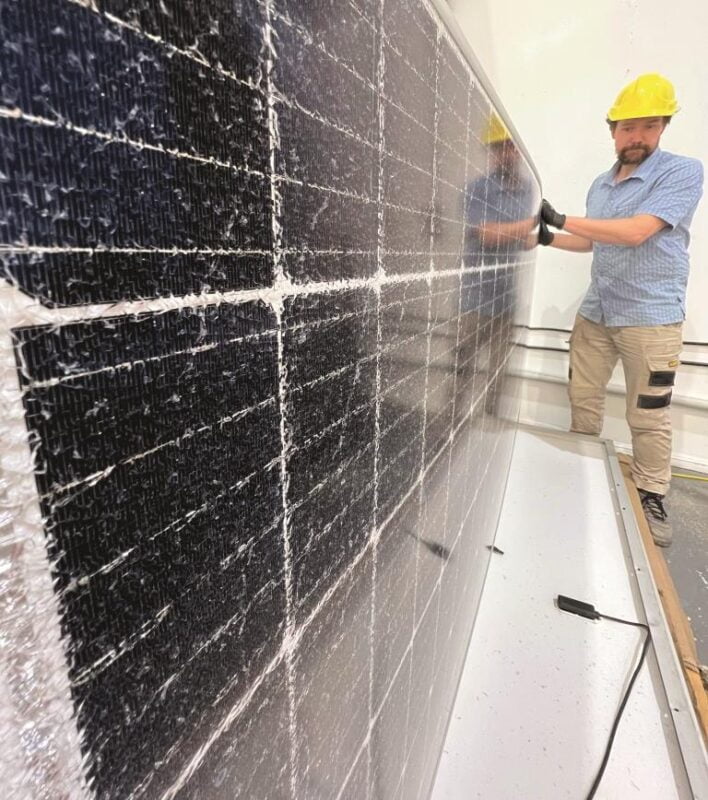 At PV Lab Australia we have recently introduced a static mechanical load test to our suite of offerings. It is designed to assess how the panels will hold up to specific conditions, and these can include mounting configurations, snow load or wind.

If you are a system designer or owner and are interested in questions such as “Can our system withstand a wind event in 100 years?” » the test is for you.

The static mechanical load test was developed in our laboratory by Gabriel Nelson and Lawrence McIntosh, and is performed in accordance with IEC 61215, test number MQT16. According to Mike Home, technical sales manager for solar mounting system manufacturer Schletter, mounting configurations (one vertical, two horizontal, etc.) are typically specified by engineering, procurement and construction (EPC) or the developer.

Shelving manufacturers consult the data sheet for the chosen module, noting the clamping points and dimensions of the module, and then design the shelving system accordingly. If the system is installed in an area that is particularly exposed to wind, Home recommends additional testing.

“Measuring and understanding the pressures exerted on the modules allows Schletter to go beyond standard modeling and make specific modifications to the shelving design to ensure the longevity of the panels,” he says.

Before starting the test

In order to perform a useful static mechanical load test, there are a few questions to consider: How will the panel be mounted? Is it a portrait or a landscape? How many rails and clamps are used? What type of mounting equipment should be used for testing? What are the clamping areas and clamping sizes? What is your design load and what is your test load?

You also need to know what you want to track throughout the tests. At a minimum, the standard requires both a visual inspection before and after, and a wet leak test before and after the static mechanical load test.

Other options include including power performance, electroluminescence, and insulation resistance to assess module performance after mechanical stress.

In the testing room

The test continues by applying the test load. We use water as the test load, but other possibilities include sandbags, air-operated suction cups and pressurized air bladders.

The weights are substantial. For a panel with an area of ​​2.2 square meters, the application of 2400 Pa is equivalent to approximately 540 kg. The load is applied for one hour, during which the electrical continuity of the module is monitored. The module is then returned and the process is repeated.

At the end of the second hour, one cycle is complete. The full test requires three cycles, so it takes at least a day to process one panel.

Electrical continuity is checked by applying a small current through the panel and checking that it is continuous for the duration of the test – just like the continuity tester in a multimeter. If a panel fails the test, we observe a current drop.

The panels deflect considerably under load during the test. In our experience, it is not uncommon to see deviations of several centimeters over a panel length of two meters. Deflection amounts depend on mounting configurations. Although disconcerting to observe, the deflection is primarily elastic and seen in panels that pass the test.

Sometimes a panel breaks. Inside the lab, it’s somewhere between a little thrill – as a place of quality control, we’re not usually used to breaking our subjects – and a sad event, requiring downtime and cleaning.

The static mechanical load test is a destructive test. Once finished, panels should be carefully checked before being reused or recycled.

Over the past few years, PV Lab has been approached many times with requests for static mechanical load testing, but preparing the lab to provide a new test is far from trivial.

Considerations range from those that might be considered obvious, such as fully understanding the requirements of the standard and determining how to safely and repeatedly apply loads of several hundred kilograms evenly to a solar panel, to less obvious considerations such as where to put the thing – the static mechanical load test is a low throughput (one panel per day) test that takes up a lot of floor space.

However, we are keen to respond when the solar industry in Australia lacks significant capacity such as these tests, so we have risen to the challenge. We considered several different options for the actual load, eventually settling on water as it conforms perfectly to the surface of the panel when it bends.

Our final design contained a number of flexible troughs, all suspended and loaded with water. In a fitting homage to our hometown of Canberra, we affectionately call him ‘Skywhale Junior’.

Photovoltaic installations are increasingly moving to the remote fringes of Australia and, as with all things climate, wind load is likely to become more of a problem in the years to come.

“Skywhale Junior” and the team at PV Lab Australia will be happy to weight down your panels and cross their fingers for a gentle tilt in the breeze with no sign of broken glass.

2022-06-01
Previous Post: IKEA will sell solar panels to Americans
Next Post: North of Chicago, a contaminated landfill will be repurposed for solar power: NPR