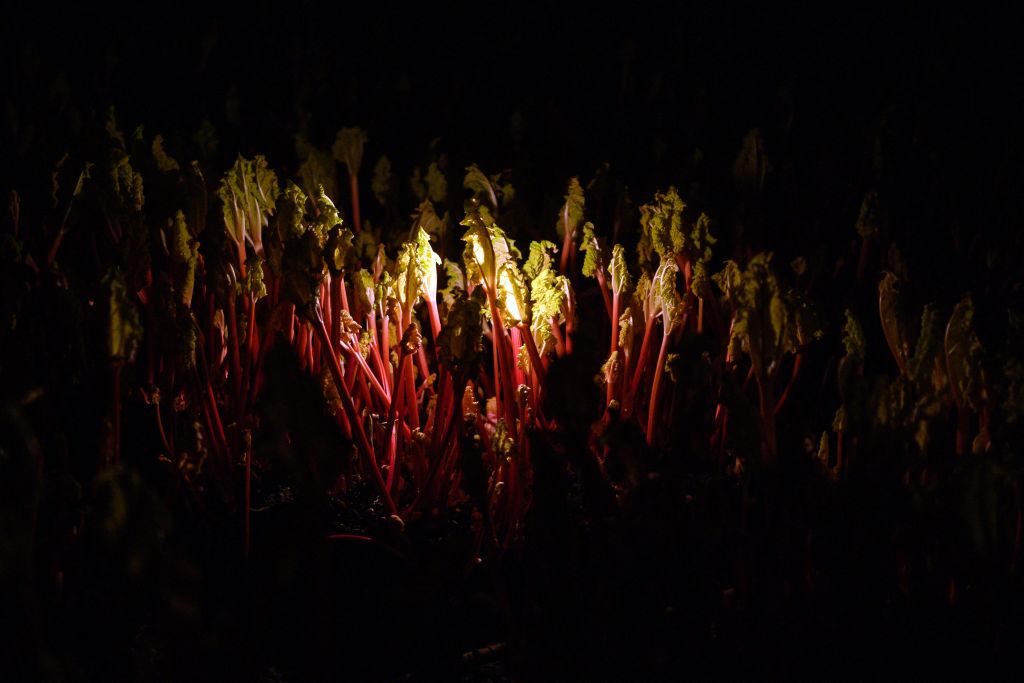 Scientists use solar panels to grow plants in the dark

Is it possible to grow plants in the dark without the presence of the sun?

Life as we know it depends on photosynthesis. Plants need sun, water and carbon dioxide to thrive. However, scientists are breaking the limits of photosynthesis by attempting to grow plants with solar panels.

(Photo: OLI SCARFF/AFP via Getty Images)
Forced rhubarb is lit by candlelight as it is harvested by farmer Robert Tomlinson at his farm in Pudsey, near Leeds, northern England, January 13, 2022

Professor Robert Jinkerson of the University of California, Riverside noticed an engineering problem when he saw the low efficiency of photosynthesis.

If more energy can be extracted from every square inch of sunlight, less land will need to be used for food production in general. According to Jinkerson in a statement with Wired, the ultimate goal is to change the way humans think about growing crops and practicing agriculture.

According to Wired, solar panels are far more efficient than plants at converting sunlight into energy, which can then be used to grow crops in the dark using electricity.

Jinkerson and his team said that using solar panels can power electrocatalysis – a process that generates a liquid used by plants, yeasts and algae as a substitute for the sun, in a newly published scientific study published in the journal NatureFood.

Read also: IKEA is going to sell solar panels in the US – Here’s how to get one

Grow plants in the dark

Scientists used a solar-powered device that creates acetate, a chemical that can be diluted in water and given to plants. The research team used this mixture with fungi, algae and yeast to grow a variety of commonly produced plants such as rice, tomato and many others.

According to Wired, it’s not particularly surprising that algae and yeast both thrived on the acetate combination, since researchers already know that these organisms can consume acetate.

However, what was fascinating about the study was that the culture ate the acetate and continued to grow despite being placed in complete darkness.

Does that mean we can all grow plants in the dark now? Well, not exactly.

After the plants had grown for a little while, Jinkerson and his colleagues dissected them and examined them to see if they contained any carbon molecules from the acetate. It was only then that they discovered that plants consumed the acetate.

Although plants can theoretically grow on acetate, they hardly thrive on it and, in the worst case, it can be toxic to them.

This means that it will be a long time before typical cash crops can be grown in the dark. However, Wired noted that this approach could be useful for vertical farms, which currently incur high electricity costs for the LED lights that power their plants’ photosynthesis.

Jinkerson said it would be more energy efficient for vertical farms to use electricity to produce acetate rather than lighting if scientists could figure out how to grow plants that can survive on the ‘acetate.

This article belongs to Tech Times

ⓒ 2022 TECHTIMES.com All rights reserved. Do not reproduce without permission.