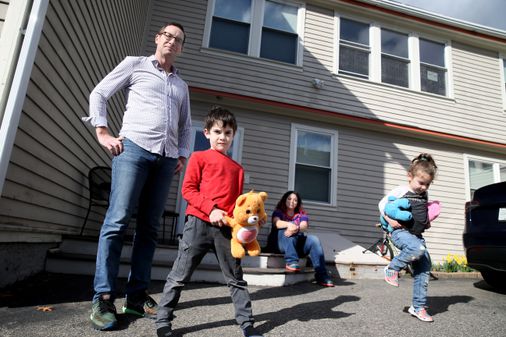 They spent $24,000 on solar panels. Then Eversource took four months to activate them.

“We wanted to save money and increase the value of our home,” said Matt Kelly, 50, freelance writer for a corporate governance newsletter.

The Kellys also wanted to do their part to fight climate change. They have two young children and worry about the world they will inherit. (The Kellys also recently switched to an electric vehicle.)

At first, Matt Kelly said he feared supply chain backlogs would cause delays. But the dozen panels arrived on time and were installed on November 24. A few weeks later, a municipal inspector approved the construction.

By mid-December, all that remained before the Kellys could “flip the switch” to turn on the solar power was for Eversource to show up for an inspection and sign off.

But before the Kellys could ask Eversource to do the inspection, they needed the utility to approve what it calls its “interconnect request,” a bit of paperwork that would prove to be a huge drag on the process.

The application was filed by the Kellys in October, six weeks before the panels were installed. For months, Matt Kelly and his contractor, Great Sky Solar of Arlington, had pestered Eversource for the status of the application, but received few responses.

In December, Eversource disclosed that interconnect requests filed by the Kellys and other customers had been delayed by “a computer glitch” at the utility level and apologized.

Another month passed. Requests for updates continued. “Can we please get an update on this project? This is hugely overdue,” a Great Sky Solar project manager wrote to Eversource in January.

Finally, on January 25, Eversource approved the request. But it then took nearly two more weeks for Eversource to send a technician out for an inspection. By then, four months had passed since the Kellys had filed their application.

The Eversource technician discovered that one of the meters had been wired incorrectly. Great Sky Solar immediately acknowledged its error, corrected it within 24 hours, and implored Eversource to return promptly for re-inspection.

But instead, there was more delay.

In the email he sent me, he wrote: “The last step is just for an Eversource technician to come to my house and activate the new meter – and Eversource is just dragging its feet there. above, for months.

“I asked Eversource directly to make an appointment, no response. [Great Sky Solar] checks with Eversource weekly and gets no clear answer. We asked, we stepped up, we begged. Eversource simply takes no action. This has been going on since the first week of December.

“It’s a ridiculous situation that undermines Massachusetts residents trying to fight climate change, reduce our dependence on oil, or simply invest in the value of your home.”

Last week I contacted Eversource, New England’s largest utility. Eversource promised to look into the matter. Two days later, I received a call from a Great Sky Solar project manager who seemed almost dazed by an email he had just received from Eversource.

Here’s what the Eversource email said: “Your system…has been cleared to operate and you can now be interconnected with Eversource Energy.”

An Eversource spokesperson said the utility “truly understands how frustrating the whole experience” was for the Kellys, but said their experience was unique – “an outlier” among the over-7s. 000 households whose interconnection was approved last year.

“Mr. Kelly’s project is out of the ordinary as we encountered unique circumstances including winter storms and a computer glitch that delayed its approval,” the spokesperson said.

I asked if my involvement had prompted the utility to act more quickly, but Eversource’s spokesperson did not respond directly, saying “whenever there is an issue, customers should contact us directly “.

But that’s exactly what the Kellys had done – endlessly.

“We don’t want to see any unhappy customers there,” he said. “And managers review [Kelly case] to see what improvements can be made.

“No, it doesn’t affect our bottom line and there are no intentional slowdowns in the process,” he said. “We appreciate our customers who are turning to sustainable energy. We take this very seriously.

Eversource needs to do much better. Utilities like Eversource and National Grid should make the process of “tipping the switch” faster and easier for anyone who wants to generate renewable energy with rooftop solar panels.

Kelly said some of his neighbors near Inman Square observed the process he went through to “go solar”.

“I recommend it,” he said. “But the process needs to be much smoother, much faster.”

2022-03-31
Previous Post: How Solar Panels Power Our World
Next Post: More solar panels must be made in Europe to reduce reliance on Russian gas, EU says